A new energy drink with gamers in mind.

When it comes to drinking something caffeinated to keep you in a good gaming mood for most of the night, there are plenty of choices to select from. Monster, Bang! Energy, and even good ol’ fashioned soda for those that are on a budget.
However, a new company called Nerd Focus is looking to get into the action, with infused energy drinks that keep gamers energetic and mindful during their most frenetic game sessions.
The company recently invited us to try out a couple of their flavors, and the results actually turned out pretty surprising.
Nerd is “formulated to increase clarity and concentration, boost memory and cognition and support overall brain health,” according to the official website.
We’ve got more details about how it got started below.

Standing Apart From The Pack
The team explained how Nerd Focus stands out from other competitors on the market, mainly with a mixture of “Nootropics, Adaptogens and Vitamins” – quite a potent mix, indeed. Ingredients include Huperzine-A, Ginkgo Biloba, Alpha-GPC and GABA, combining together to create a refreshing taste, while at the same time building up energy with each sip. 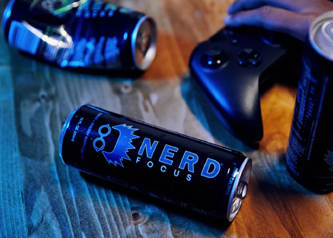 Nerd is the focus of a University of Texas student, who crafted his own “think drink” to counter those other ones he tries on the market. It soon became big hit on campus; and years later, it sells in over 2,000 locations, making almost $1 million in annual sales.
Now, the team’s ready to take it to the next level with wider distribution and its own shop page, where fans can pick up packs and other goodies to show off their nerddom.

Only Two Flavors, But Both Good
At the moment, Nerd only offers two flavors to choose from. There’s the original Focus + Energy Supplement, and a special Zero Calorie version for those that like to watch their weight.
We decided to give both of them a try.
Using all natural caffeine, both of the Nerd flavors have a zestful, enjoyable flavor. Those that prefer something sweet should stick to the original brand, which has just the right mixture of sugar and energy, working with a nice, potent finish as a result. It’s also got a sharply designed green and black can, so it’s easy to spot on store shelves.
That’s not to sell the Zero Calorie flavor short, mind you. In fact, it’s probably our favorite of the two, as it has an energetic flavor to it as well, but without the sugary aftertaste. It’s in a blue and black can, also easy to spot on store shelves.
So no matter which way you go, there’s flavor to spare, and energy packed within a neat little can. The only real question is whether Nerd will continue to flourish with new flavors. A “Pina Colada”-flavored energy drink would go a long way.

Give It A Try For Your Inner Nerd!
Currently, those interested in giving Nerd Focus a try can order it on the official website for $29.99 for a 12-pack. That may be a steep price for some, but it provides the right amount of energy for your body and brain, and our time with it was well spent savoring the flavor. Some expansion wouldn’t be the worst idea, but this is a great place to get started. Now get on it, nerd!
(Thanks to Nerd Focus for sending us some samples!)
Want to win a PlayStation 5? Here’s your chance!